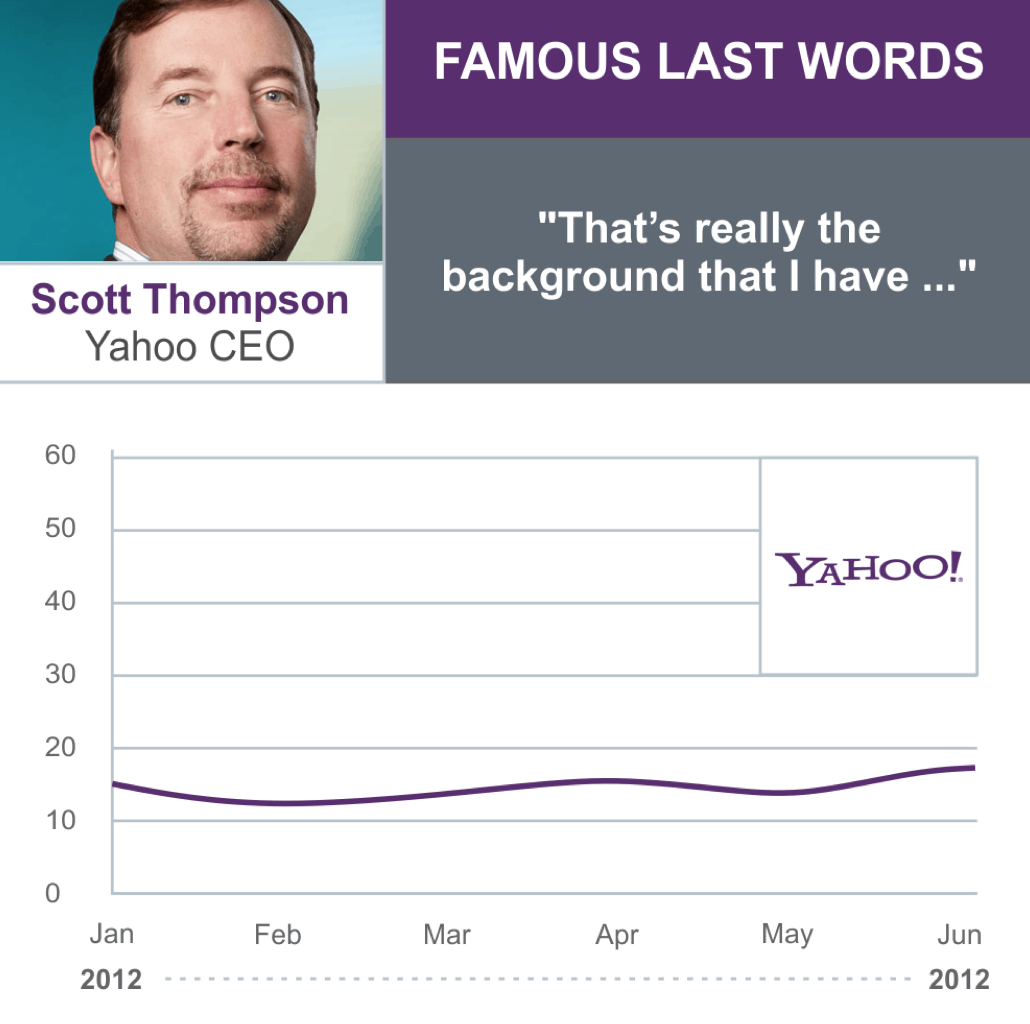 When you create a marketing message, it pays to speak the truth, say the right things and avoid the wrong words.

Telling the truth is a great habit because:

Telling the truth – even if you lied earlier – can save your job. And in Scott Thompson’s case, $20 million.

When Yahoo hired Thompson as CEO in January 2012, he brought strong tech-company experience as president of PayPal. And he negotiated a compensation package worth as much as $27 million, the Los Angeles Times reported.

But an old lie was buried in Thompson’s résumé. It went undetected at first.

Then came an allegation from a dissident shareholder, Daniel Loeb, to the Yahoo board of directors. At first the charge seemed improbably small, even petty.

Loeb alleged that Thompson had falsified his résumé by claiming to have a “computer science” degree from Stonehill College. These two words would undo Thompson.

At first, the board didn’t buy into Loeb’s accusation. Yahoo called the résumé problem “an inadvertent error,” according to Forbes.

One director said, “Scott is a forthright, no-nonsense, straightforward personality and a likable guy.” The board was ready to back Thompson up in a fight against a dissident shareholder.

Hoping for an easy explanation from the CEO, the board named a 3-person committee to investigate the allegation.

That committee assigned board chairman Roy Bostock to speak with Thompson. Bostock stressed that the CEO could deal with the situation in only one way: “Immediately tell the absolute and total truth, whatever it is.”

For Thompson, the implicit deal was this: whatever had happened in the past, even if he’d lied, now it was time to tell the truth, make it public, apologize and offer to resign. Then the Yahoo board would decide who to back – Loeb or Thompson.

As the New York Times wrote, “In that case, the board would have assessed the situation, but might well have stood behind him.” For a time, it appeared that Thompson got the board’s message.

But then he blew his chance to come clean. Instead of explaining what happened, Thompson expressed anger with Loeb. And he offered the board no explanation whatsoever.

As Thompson’s cover-up snowballed, Yahoo managers told board members just how much his behavior rattled them. Yahoo shareholders already had plenty of reasons to be unhappy, so internal unrest was the last thing the company needed – and the board knew it.

Behind the scenes, Thompson maneuvered to keep the truth from getting out. Without offering explanations to anyone, he sought pledges of support from directors and managers. When a top manager declined to support him, Thompson told him to keep the conversation secret.

Bad move. As a board member observed, “Scott was trying to rustle up support, and when he didn’t get it, he tried to silence people. This went straight to the trust issue.”

Then, an NPR radio interview with Thompson surfaced in All Things D. Interviewer Moira Gunn hit the nail on the head when she asked Thompson about his degree in accounting and computer science.

In that interview, Thompson confirmed his double major and went on to say, “That’s really the background that I have, and it started back in my college days, and I think that’s really the wonderful part of being an engineer is you think that way.”

In a meeting with Yahoo employees the next day, Thompson blamed the mix-up on a recruiter, Heidrick & Struggles, which placed him into the CEO job at PayPal years ago.

But Heidrick quickly issued a public rebuttal: “Based on information in our possession, this allegation is verifiably not true and we have notified Yahoo to that effect.”

In the eyes of the board, that was game over for Thompson. “That was the final straw. We never got this confirmed, but I presumed he had given them a statement or résumé that contained the false degree,” a board member said.

The next day, the board met to decide what to do about Thompson. An hour into the meeting, Thompson texted an ally on the board, asking him to step out of the meeting for a moment.

At that moment, Thompson revealed that he had thyroid cancer. Although he’d informed the board earlier that he needed throat surgery, he hadn’t told them it was for cancer.

He said that he had delayed surgery to start the job at Yahoo. Due to the delay, now he would need to take a medication that would make him groggy over the next month or so.

His ally stepped back into the board meeting and said, “It seems like Scott has decided to part ways with the company … it was not a formal resignation, just a conversation where he said he’d come to this conclusion.”

The CEO’s latest revelation led to hours of discussions. Was Thompson seeking a graceful way out? Or was this just his last-ditch ploy to drum up sympathy?

Legal counsel advised the board that Thompson’s medical condition had no bearing on their decision. While they’d been leaning towards firing Thompson for cause, they decided to sleep on it and make a call the next day.

The next day, the board booted Thompson. A director who met with Thompson said he seemed resigned to the board’s decision. The director found him focused on his illness, unable to face the simple fact: a two-word lie on his résumé undid him.

As the New York Times reported, one person who talked to him said, “He did say that he was sorry he hadn’t been able to meet the board’s expectations. I took that as an oblique apology, and I wished him well.”

Yahoo’s news release on Thompson was telling. Stating no reason for his exit, the release said only that he had “left the company.”

With an interim CEO put in place, the board’s plan to fight dissident shareholder Loeb was in tatters. Capitulating, the board granted Loeb three seats on the board.

Only 11 days after an unlikely accusation, CEO Thompson was forced out.

Bad enough: he’d lied on his résumé. Worse, it was a lie he probably didn’t need to tell, since his PayPal experience could have secured the job at Yahoo. Worst of all, he even missed his second chance to redeem himself by telling the truth.

On the day he was fired, Thompson had been in the top job for all of 5 months. His little lie cost him big bucks: he forfeited $20 million of his $27 million compensation package.

Thompson’s case teaches one simple, ugly, object lesson: A small lie can snowball fast and cost you a fortune. As Shakespeare wrote in Macbeth, “All will out.”

For more on how messaging can go wrong for CEOs, read Wrong Words End Careers. 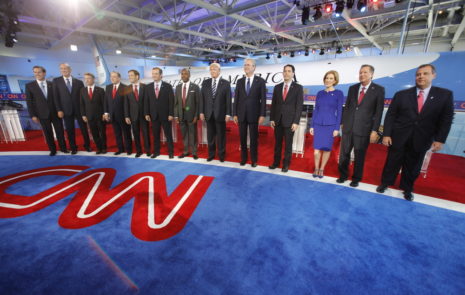 Marketers can learn a lot about winning messages from watching political debates. In U.S. presidential debates candidates get a chance, in a free marketplace of... 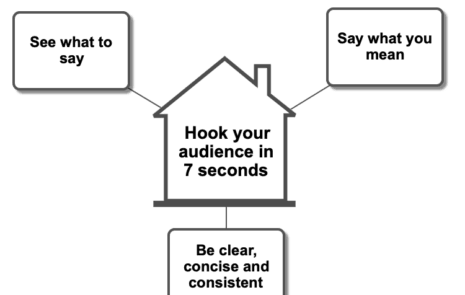 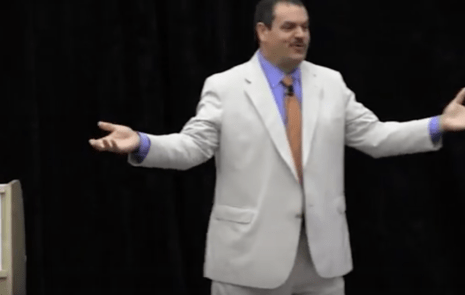 Here are the top 10 blogs from 2017, chosen by thousands of readers like you. They’re chock-full of ideas to make your marketing more... 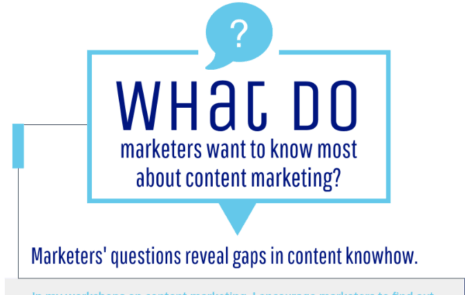 What do marketers want to know about content marketing? [Infographic]

“What are your top 3 content marketing questions?” That’s a question I asked hundreds of marketers in my workshops over the past year. An analysis of...