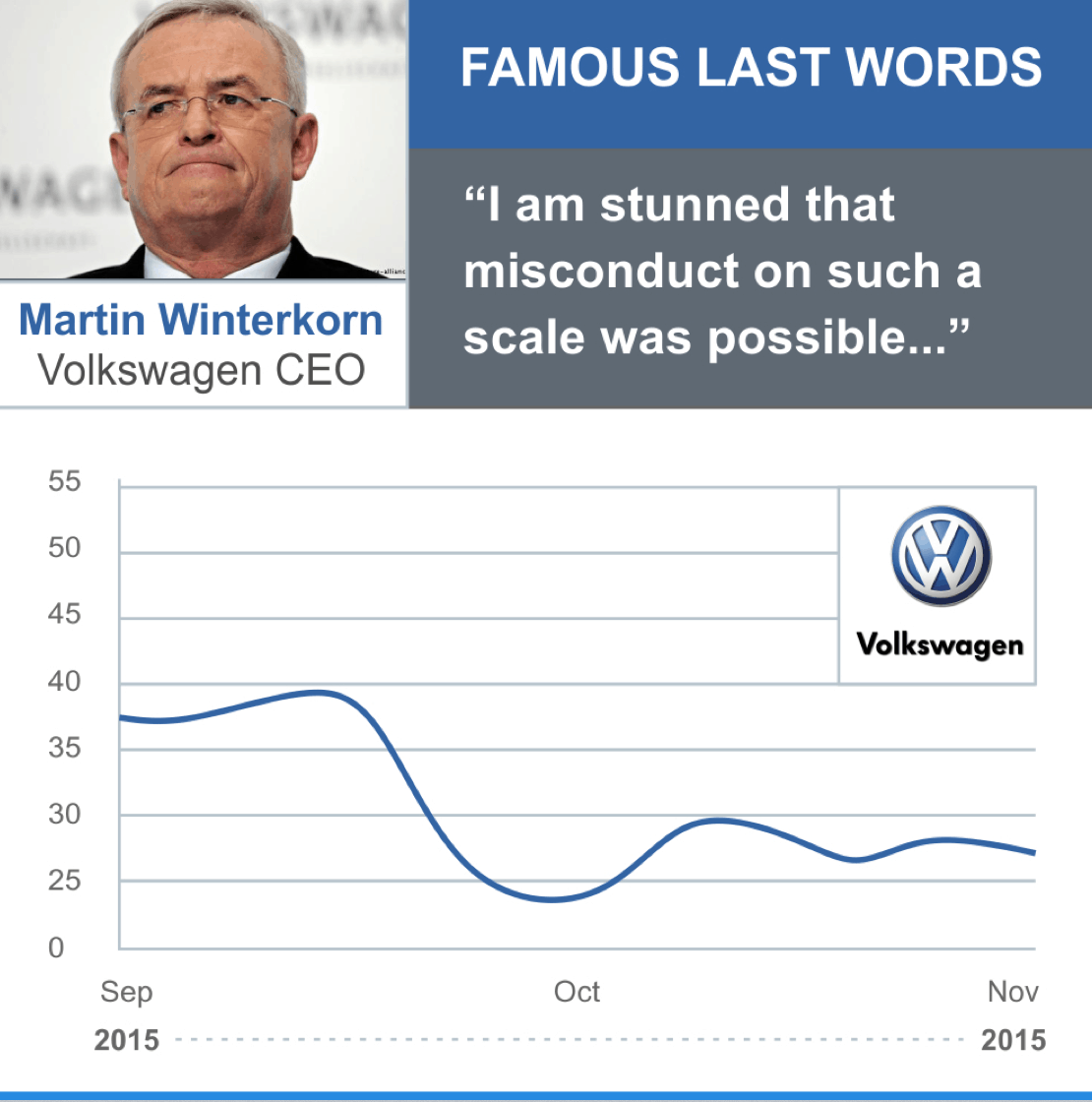 How Much Does a Cover-Up Cost?

Since then, another $25 billion in costs have piled up. No one knows how long the bills will keep coming.

CEOs who are tempted to take shortcuts, like Volkswagen CEO Martin Winterkorn, need to ask: How much does a cover-up really cost?

For years, Winterkorn had a single-minded focus on making his company the world’s #1 car company. His ambition to surpass Toyota was audacious, and it took years for VW to achieve.

In June 2015, Volkswagen passed up Toyota for the first time and became #1!

It proved a short-lived triumph. By September 2015, Volkswagen was enmeshed in a scandal for falsifying emissions data on nearly 500,000 diesel-engine cars sold in the United States.

The U.S. Environmental Protection Agency found that VW engineers had designed “defeat devices” to falsify emissions testing results. On the road, the cars’ emissions were about 10 times dirtier than in tests.

But the U.S. dirty diesels represent only about 5% of Volkswagen’s global problem. Worldwide, Volkswagen sold 10 million cars with “defeat devices.”

As Winterkorn shows, a CEO with the wrong message can destroy value and reputations overnight. As news of the scandal broke on September 22, 2015, Volkswagen shares dropped 23% in one day, wiping out $17.6 billion in market capitalization.

Yet that $17.6 billion was only the tip of the arrow deflating Volkswagen’s finances:

“I am shocked by the events of the past few days. Above all, I am stunned that misconduct on such a scale was possible in the Volkswagen Group.”

Here’s what the CEO completely missed: In the midst of a crisis that your company allows or causes, no one cares about you, the CEO.

A leader who insists he’s shocked makes his message hard to swallow. Your customers, employees, and investors are wondering: How could you not have known?

While Winterkorn shouldered responsibility, he never apologized. “As CEO I accept responsibility for the irregularities that have been found in diesel engines and have therefore requested the Supervisory Board to agree on terminating my function as CEO of the Volkswagen Group. I am doing this in the interests of the company even though I am not aware of any wrong doing on my part.”

Fascinating! He never claimed innocence. He said if there was any wrongdoing on his part, he wasn’t aware of it. Corporate doublespeak at its worst.

“Volkswagen needs a fresh start – also in terms of personnel. I am clearing the way for this fresh start with my resignation,” Winterkorn said. “I have always been driven by my desire to serve this company, especially our customers and employees. Volkswagen has been, is and will always be my life.

“The process of clarification and transparency must continue. This is the only way to win back trust. I am convinced that the Volkswagen Group and its team will overcome this grave crisis.”

Wait a minute! How can he proclaim his life to be “always Volkswagen” on the same day he gets fired? And which clarification, what transparency, exactly, was he talking about?

His words, no doubt engineered by layers and layers of lawyers and PR people, make absolutely no sense. Without the truth, there’s no way to build a believable message.

Winterkorn’s famous last words gave away much more than he intended.

Depending on how you read them, they make him sound either disingenuous or completely clueless and irresponsible. Take your choice.

It’s clear that he considers himself blameless for the actions of his company during his tenure. Yes, you can drive 10 million Volkswagens through a blind spot that big.

What’s more, the Volkswagen supervisory board supported him with, “The executive committee of the supervisory board thanked Mr. Winterkorn for his contributions to the company and said the CEO had ‘no knowledge of manipulation of the emissions data’.”

The Volkswagen Board statement sets off alarms. How could any board know what a CEO knew or did not know? Since they could not possibly know, saying they did makes the board part of the problem, not part of a solution.

Jumping into the breach, a Volkswagen USA executive dug the hole even deeper in testimony before a U.S. House subcommittee.

Michael Horn, CEO of Volkswagen USA, said, “To my understanding, this was not a corporate decision. This was something individuals did.”

He suggested that the scandal might have sprung from the actions of a few rogue engineers, since there “was pressure in the system to get resolution and also in conjunction with the cost pressure as well.

Horn admitted that Winterkorn created a culture of profits before people. He acknowledged that workplace pressure had led to unethical behaviors.

In March 2016, after 25 years at Volkswagen, Horn left the company “by mutual agreement” to pursue other interests.

That begs the question: How could the identical actions happen in 3 companies, while none of the executives or supervisory board members knew of it?

The defeat devices must have been a poorly kept secret within Volkswagen. Der Spiegel noted that the scope of the scandal directly implicated at least 30 managers.

At best, the leaders of all 3 companies were asleep at the switch. Hard to believe. At worst, they conspired to cheat customers, pollute the planet and cover it up.

As Paul Kedrosky wrote in The New Yorker, “They wrote code that fundamentally changed how the company’s diesel cars worked. The altered software affected engine emissions, mileage, cost, and power – all things that auto executives care about. In other words, while it’s technically possible to install such software, it’s hard to imagine that it could have gone unnoticed.”

The whole truth about Volkswagen may never come out. But almost a year later, VW’s wounds are still bleeding.

Certain facts are clear: Winterkorn directly oversaw the engineers in Volkswagen’s research and development. And he had been running Volkswagen operations at the time when it began cheating on emissions tests.

If you generously assume, for a moment, that Winterkorn did not know about the scandal. Could he have said the right words?

Yes. He could have said,

“I take responsibility for Volkswagen falsifying emissions tests. That’s completely unacceptable. I apologize. We are launching an internal investigation immediately. No stone will go unturned as we root out every single wrong-doer, as well as those who covered up these unacceptable actions.

“Volkswagen will make amends to our customers. I promise that we will correct the problem as soon as possible. We will fix your cars, pay you for their loss in value and extend the warranty for 5 more years.

“Volkswagen leaders and people must behave in a way that makes us proud of every employee, every decision, and every car we make.”

But that’s not what he said. Instead, Winterkorn pretended not to know what was going on.

The fallout from the emissions scandal may or may not kill Volkswagen. But it may kill the  “green diesel engines” – no small matter, since such engines dominate the auto market in Europe.

Winterkorn is hardly alone. Famous last words have ended the careers of many CEOs:

That’s why it’s so crucial for company leaders to get your message right. 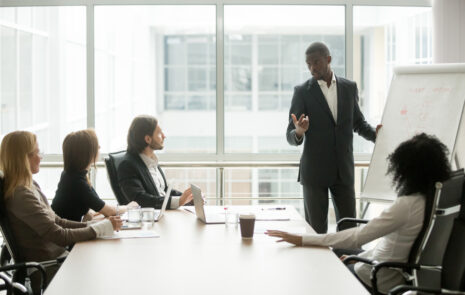 Presenting is a great way to market yourself and get your message heard. But if you don’t follow some simple rules of presenting, you... 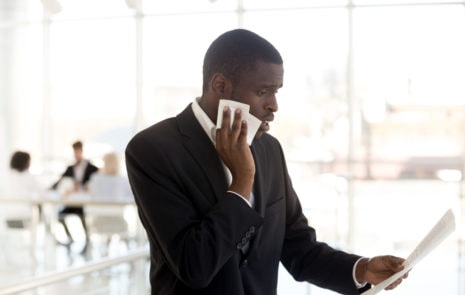 Reduce anxiety before your presentation 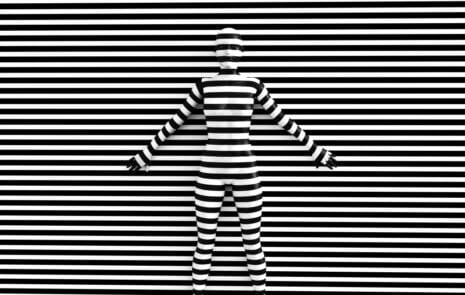 Is your marketing message too generic? 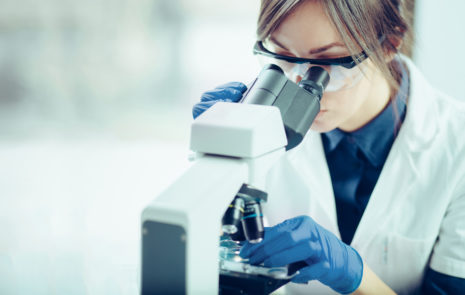 How does content marketing apply to a highly specialized and highly educated audience?

I work with a lot of technology companies. I’m often asked how best to apply content marketing to a highly educated audience with specialized...