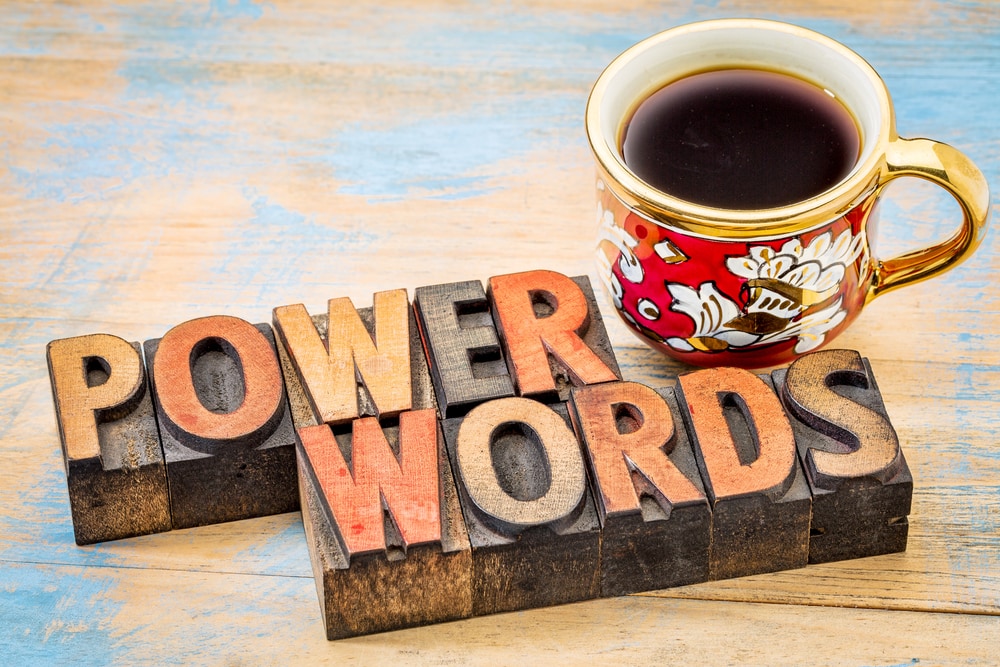 4 ways to use power words to supercharge your message

To supercharge your message, add power words. Power words enable you to capture attention as you paint pictures, engage emotions, create curiosity, and seduce the senses of your audience.

Just as magicians use magic words like abracadabra, leaders, marketers, and communicators use power words to supercharge their messages.

A powerful message is built on power words, carefully chosen one at a time. Your message deserves exactly the right words.

What are power words?

They’re the words that help you get ahead and make your message stand out. They cut through to audiences because of how the human brain works. They’re clear and precise.

The French call the right word le mot juste, translated variously as: to say it right, to make it clear, to choose the correct term, to to use exactly the right word.

Power words are the right words, chosen to help your message break through to today’s distracted audiences. They capture people’s attention, engage their emotions, create burning curiosity, and seduce one or more of the five senses.

The most high-powered word is [your name here].

My name is George. Once I worked in a newspaper’s open office with an editor named George and a proofreader named Georgeanne. When anyone said “George,” all three of us looked up, every time. Even though we knew there were two more Georges in the room.

Use people’s names because it works. Personalize your content with names whenever possible. Connect with people by mentioning the names of people you know in common.

Your name paints a picture – the one you see every day in the mirror. And it stirs your emotions.

The second-best power word is the most underused. It’s a pronoun that substitutes for a name, namely you. Good content marketing is written in the second person – you.

Copy that’s irresistible is all about you the customer, not about we the marketers.

Yet a Forrester report shows that you are the most underutilized power word in marketing. The study shows that about nine out of 10 marketers (88%) admit their home pages talk primarily about themselves – their companies, products, and services.

But bragging and self-talk do not make your brands more attractive to customers.

Only one in ten marketers talk primarily about clients’ and customers’ needs on their home pages and elsewhere. Customer-centric content is what people seek out. It’s all about you, you, you.

Note: Copywriters sometimes substitute the word I for you in calls to action, such as a button that says, “I want it now.”

How did the Internet seduce so much of people’s attention?

With a cornucopia of apparently free things: free trials, free samples, free memberships, free shipping, and free gifts. Thanks to simple human greed, all things free have the power to turn heads.

More and more people are seeing that the Internet is not really a free lunch. You pay with your attention, which someone else monetizes.

Such words send an urgent telegram to the brain, prompting it to pay attention because something new is about to be revealed.

Use the word because to answer people’s questions about why.

The word because works even if the reason behind it is weak, says a study by Ellen Langer, a Harvard psychology professor.

Langer’s experiments proved the importance because by testing 3 scenarios at a copier. When someone wanted to cut into the line to make copies, they made their request in one of three ways:

Only 60% of people said yes to the first question, which lacked the word because.

But 93% of people said yes to the second question since it used the word because. Because triggers assent, even when the reason offered is weak. That is, everyone who's in a copier queue needs to make copies – so your need to make copies is not a great rationale.

And 94% of people said yes to the third question with the word because.

Use the word because to trigger compliance. Most people hear because and comply without listening closely to the reason that follows.

People love seeking useful information, especially how-to information. How is the number one question on the Internet. Much of the Internet’s most valuable content is about how to succeed … at any endeavor.

For example, the most popular type of content among business-to-business buyers is prescriptive content. Some 97% of buyers want content that lays out a step-by-step formula for success, says the Demand Gen Content Preferences Survey Report.

When author Jonah Berger studied which content becomes viral on the Internet, the usefulness of information was one key driver. By definition, how-to content is highly useful.

Positive messages are shared more often in social media than negative messages. Good news beats bad news – that is, except when algorithms and conflict entrepreneurs intervene to amplify content that accelerates or propagates conflict, real or imagined.

The most-shared posts on social media engage high-arousal emotions such as anxiousness, anger, and awe.

For example, the fear of missing out (FOMO) is what’s behind limited-time offers and scarcity headlines like, “Only two left at this price.”

Fear of social disapproval is behind the classic John Caples ad headline: “They Laughed When I Sat Down at the Piano But When I Began to Play!~”

People feel safe when they hear confirmation from people like themselves. Build trust through social proof such as ratings, rankings, awards, case histories, and testimonials.

The Edelman Trust Barometer study shows that people trust people like themselves as much as they trust academic and industry experts – and more than they trust CEOs.

The feeling of admiration and elevation in the face of something greater than oneself – awe – is uniquely powerful. A sense of awe appears in words such as incredible, amazing, astonishing, breathtaking, and awesome.

What inspires awe? A story about someone who overcomes adversity. A new scientific discovery. A transcendent moment.

Awe works by opening the mind to previously unconsidered possibilities. Evoking a sense of awe is powerful enough to upend the status quo.

Awe and joy take the high road of human emotions. What about the low road?

On the low road of emotions are words that appeal to the 7 deadly sins: pride, gluttony, lust, greed, wrath, laziness, and envy.

Pride incents people to seek out experiences that mark them as smarter, richer, better, or holier than others.

Flatter people. Appeal to their egos. “Join this exclusive club. Only one out of 10,000 people qualify.”

Pride and exclusivity are crucial for luxury brands. “Only 50 cases of this wine will be released.”

Greed drives people to seek free things, even things they wouldn’t otherwise want. Coupons and “50% off” or “buy one, get one free” offers feed on greed.

Greed drives headlines such as “Warren Buffet has $1 million worth of advice for you.”

Curiosity is sparked by an information gap, theorizes George Loewenstein at Carnegie Mellon University. When there’s a gap “between what we know and what we want to know,” curiosity arises.

Curiosity is the reason why game shows still captivate people. People are most curious when they know a little bit about a subject, but not too much, says a study by Colin Camerer at Caltech.

Use curiosity-generating words such as backdoor, bootleg, confessions, covert, forbidden, insider, mystery, secret, and revealed. Generate curiosity with verbs like discover and find.

Spark people’s curiosity by posing a question. Questions stimulate people to lean in as they start thinking of potential answers.

Create curiosity with headlines that include numbers, including list posts. List posts such as rankings, award-winners, or 10 reasons why spark curiosity. For example:

To maximize the power of numbers in the text, use numerals, not spelled-out numbers. Old-school copywriters advise using odd numbers rather than even numbers in headlines, just as many photographers prefer an odd number of subjects in a photo.

Too often, numbers sail over the heads of an audience.

For example, when McDonalds introduced the Quarter Pounder, its competitor A&W introduced a 1/3 pound burger for a lower price. The problem: people did not understand that 1/3 is larger than 1/4. Reintroduced as the 3/9 pound burger, the larger burger worked.

Here are ideas to get the most out of your use of numbers from the book Making Numbers Count.

To engage people’s imagination along with their curiosity, use the word imagine.

Imagine invites people to dream about what’s possible, even if it’s beyond anything they’ve experienced before.

Fiction writers use all five senses to help people place themselves inside the stories they tell. Use words and tell stories that engage people’s eyes, ears, nose, tongue, and fingertips.

“Imagine yourself on vacation at the beach in Hawaii, watching the swimmers, baking in the sun, clutching a cold Margarita, sipping slowly, listening to the waves wash in.”

Write for the eye.

As you help people imagine a place or a future state, focus on the sights they will see.

Describe the movements around them. People can’t resist looking at moving objects. Humans are hard-wired that way.

Write for the ear.

Which sounds will your audience hear?

Are birds singing in the trees? Bees buzzing around them? The honk of a horn calling them out of a deep reverie?

Writing for the ear also means taking advantage of certain techniques. Use rhythm, rhyme, and alliteration to make your words even more powerful and memorable. Words that rhyme seem more true, so they're more persuasive.

Use power words that sound like what they are, such as splash, murmur, drizzle, mumble, and growl.

Write about smells and tastes.

The nose and tongue combine in the closely related senses of smell and taste.

How does it smell when you put your nose next to a fresh flower? When the Thanksgiving turkey is roasting? When you bake cookies at home?

Smell and taste can also evoke disgust, a strong emotion. Doesn’t it smell awful when garbage has been rotting for weeks? When you drive by a dead skunk on the road?

Write about touch. The soft feel of a baby’s skin. The grit of sandpaper. The feel of olive oil on your fingertips. The jolt of static electricity shocks you.

Power words lift your message above others

Power words enable you to supercharge your message to break through in 4 specific ways:

Want more power words to work with? Here are links to 10 great lists of power words:

4.   Buffer: 189 Powerful Words That Convert: Write Copy That Gets Your Customer’s Attention Every Time

6.   Optin Monster: 700+ Power Words That Will Boost Your Conversions

If the power word you need doesn't exist,  it's an opportunity to coin your own word or phrase. For example: